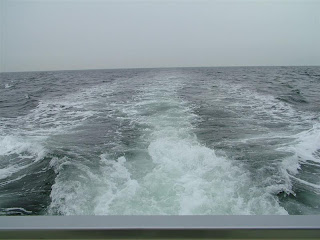 We are underway to !!! These past 2 weeks have been a blur. Non stop details to make ready to leave for and then we decided to display Nor’wester in the Anacortes Boat Show.

The show was a great success with our getting another order for a Northwest 42 and several strong prospects. The weather was snotty but the people who turned out were in good spirits and there were plenty of trawler enthusiasts there.

At the show, Chuck Gould of Nor’westing Magazine came aboard and we gave him a short seatrial. He was quite excited about the performance of the boat, especially the maneuverability with the articulating rudder. , from Passagemaker Magazine also spent quite a bit of time on the boat and then on Monday following the show, he came and did a seatrial and photo shoot. I think he will have an article in PMM early next year.

To top things off, Neil Rabinowitz, the famous yacht photographer did a full day interior shoot on the Wednesday before the show started and then we left the show early (4pm) and he did a helicopter shoot of the boat underway. When I say he did a full day on the interior, that is an understatement. Neal boarded the boat at 7AM and was finished at 10:15PM that night. He is very meticulous, but is the best and the results will show that. I will post some of the pics here when we receive them.

With all of that activity and then the last minute stuff, I haven’t had much sleep in the past week. We got underway at 6AM this morning and by 8, I was ready for a nap. I told the crew ( of our office, and Tom Gilbert of Topcat Engineering, our electronics engineers) that I felt like a cat. All I do is eat and sleep.

Conditions are pretty benign right now. The seas are only a foot or two and the boat is just purring along. We recorded the sound readings this morning in the pilothouse at 8 knots. 58db. The crew said my snoring was louder than the rest of the boat.

Our plan is to cruise all night and arrive in Gray’s Harbor at 5AM tomorrow morning. There is a strong, nasty front coming this way and our weather guru, Bob Jones of Ocean Nav suggests that we get in there and sit tight for a day or two. Not being one to tempt Mother Nature, especially this time of the year, I think we shall heed his advice. 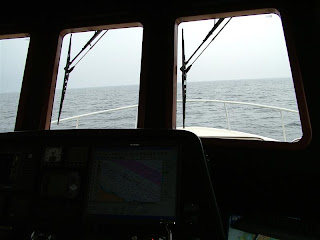