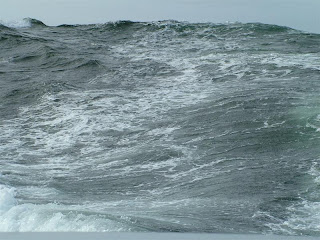 Everybody’s gone surfin’ down Californ-i-a….. This was taken out the back door earlier today. We estimate the swells to be running about 12 – 15 feet. 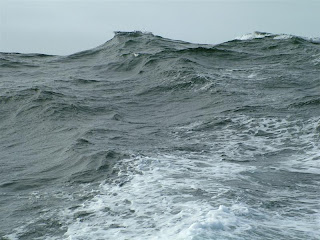 It’s Thursday afternoon and we are crossing , south of . Conditions for the past 2 days have been 10-30knots of wind out of the north with 6-15 foot following seas. We have been averaging over 10 knots for most of the time with bursts to 15+ and this is with the engine set at an rpm that should deliver 9 knots. Surfing down the waves is exhilarating. You can feel the boat accelerate down the wave much like the feeling you get when you catch a wave body surfing. I know…..not really a fair comparison.

I spoke with Bruce Kessler (Spirit of Zopolite) earlier today by cell phone and we both agreed that the articulating rudder makes all the difference in the world in following seas. He put one on several years ago on Spirit of Zopolite. The rudder angle indicator shows the autopilot is hardly working, maybe 2 or 3 degrees of rudder required to handle the largest waves. The long keel also helps with tracking.

At present speeds, we expect to be in on Saturday morning, hopefully not too early. All systems are working well. Today I fired up the Village Marine watermaker for the first time (other than tests) and we are filling the water tanks at a rate of about 24 gallons per hour.

We have seen several whales migrating south. Some go to while others go to . Researchers have determined that some whales will go to some years and then to on other years. They don’t really understand why. One year, a tagged whale was observed in both and in the same season.

We keep pushing south, making the best time that we can. We had planned to average 8 knots but our weather forecaster (Bob Jones of Ocean Marine Nav) has told us that the bad weather is following us south and we should stay ahead of it. We have been running 9-10 knots and so far have out run the gales.

With our delays in , I now will stay with the boat rather than fly home. Jan will join memore on Tuesday and we will provision and prepare for FUBAR.