I have been so busy these past 2 days that I forgot to post again. Ted wrote me an email and said I should let everyone know we made it here safely. When I last posted, we were crossing Monterey Bay. The conditions from then until arrival varied from 15 foot following seas to being able to see the reflection of the shore because it was so calm. It was mostly the former, not the latter, however.

Thursday afternoon we passed Pt. Sur…..or Big Sur as the town is known there. 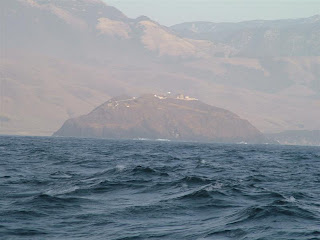 You can see here that the seas were not that bad. It was a shame that there was haze in the air so the view was not as clear as it could have been. No, it wasn’t smoke, just haze. The only fire we saw during the entire trip was up near the California, Oregon border. 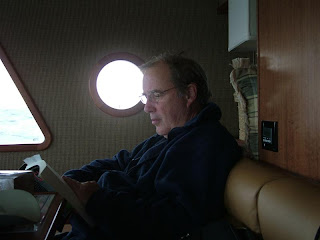 This is what we did mostly when off watch and awake. Steve read several books during the trip. I didn’t get to read much. When not sleeping, I was keeping track of our progress and answering emails and phone calls when we had good wireless service. We used Verizon and the coverage was not too bad. I was surprised that we got better cell/wireless coverage off the Washington and Oregon coast (up to 15 miles offshore) than we could get in Southern California. I could not connect or make a cell call until a mile off the outer buoy in San Diego. It is beyond me. 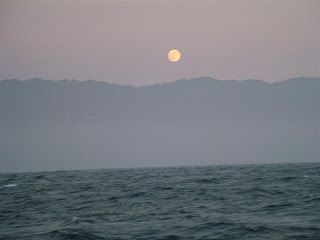 This is the moon rise. We were north of San Luis Obispo when this was taken. The full moon was awesome to see, especially when the high swells would pass beneath us. The peaks and valleys of the water with the white caps glistening were beautiful.

Thursday night the wind howled and the waves were large. It was dark so I don’t know how large they were, but we were surfing again and Steve reported a 15.5 knot highest speed. Again, this was with the boat set to run at about 8 knots. I never felt like the boat was out of control and none of us were ever afraid or apprehensive about our safety. We did talk about the fact that we were the only vessel out there and if anything were to happen, we would be on our own. Fortunately we did not have to use the immersion suits, EPIRBS, or life raft.

Friday morning found us rounding Point Conception. Immediately, the seas quieted and the winds died. We motored on in foggy, but calm conditions. Some time in the early afternoon, we crossed the shipping lanes and passed by Anacapa Island. 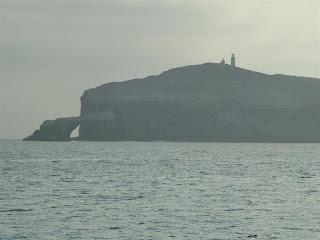 This was a bit of deja vu for me. My first experience cruising was aboard a friend’s 21′ Venture sailboat on a cruise to the Channel Island in 1970. The bug for cruising bit then and it still is infecting me some 37 years later.

Our track took us very close to Catalina Island and there were numerous tugs, sailboats, and motor yachts coming and going almost all night. It was the busiest any of us were during the whole trip. It amazes me how some people will sail along at night without any lights on. We saw no less than 3 radar targets that we finally saw in the moonlight that were out there with no lights. Two were sailboats and one was a small fishing boat, maybe 25 feet long. We managed to avoid running them down.

We entered San Diego harbor at about 8AM on Saturday morning. My good friend and fellow yacht broker, Dan Peter of Cabrillo Yachts had arranged a slip for us at Sun Harbor Marina at Harbor Island . We first pulled in to the pump-out dock and Dan soon came down and guided us to the slip we will occupy until we leave on FUBAR next Wednesday, November 7th.

A shower, clean clothes, a hearty breakfast at a local cafe and we were soon feeling human again. Tom had a flight home Saturday afternoon and Steve went of to visit old Southern California friends so I was left tidy up and prepare for Jan’s arrival on Tuesday.

On Sunday morning, I snapped this picture taken from up on the flybridge. The redness of the sky is due to the fires, no doubt. 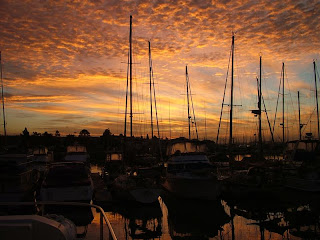 It was sure pretty, but a huge price to pay for beautiful sunrises. I would rather have gray skies I think and leave the pretty sunrises for Hawaii.

All in all, the trip has been a tremendous success (so far). The boat has performed far beyond our expectations. We only had one major equipment failure that threatened the continuation of the trip. Fortunately a jury rig solution was found and we escaped a fate worse than abandoning ship or encountering pirates, or even death for that matter. 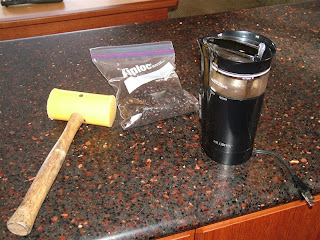 About the 3rd day out, the new Mr. Coffee coffee grinder gave up the ghost. No amount of coaxing, tapping, jarring, or talking sweetly to it would make it grind our beans. Fortunately, we had some very talented people aboard and after much discussion, an alternative solution was found. A Ziploc baggie and a plastic mallet. We just put the required number of beans in the Ziploc bag and take it into the engine room where I could tap the beans lightly until they were the right “grind” and we soon had our requisite morning coffee.

Thanks to all of you who have been encouraging my rambling musings. I am going to take a break until the FUBAR begins next week. I am not sure how good the internet connections will be in Mexico, but I will journal the happenings and get them up here on the blog when I can.