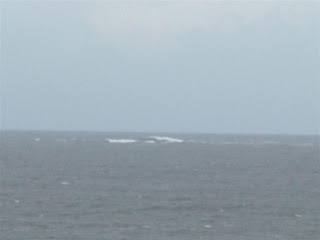 The weather since we arrived on Tuesday has been horrible. Above is a picture taken this morning of the bar that we would have to cross to leave here. This picture was taken at slack water, high tide. You can see the breaking waves that are right in the channel that we would have to take to depart.

Westhaven, the marina part of Westport is pretty much a ghost town this time of the year. The fishing fleet is in and no one seems to be doing much fishing, or anything else for that matter. We spent Tuesday and Wednesday doing small chores on the boat. I calibrated the tank monitoring system and we mounted smoke detectors, the 406 EPIRB, boat hook brackets and a few other miscellaneous items.

Yesterday we went to Westport Shipyard and had a tour of the portion of the factory that builds the Westport 130. An amazing place. They have 700 workers there in 2 shifts and they are extremely well organized. We saw 5 130’s in various stages of construction. Tom Gilbert (crewmember and our electronics engineer) has done work for Westport before so he was able to get us this insider’s tour with a friend of his that is the head of the electronics department there.

Yesterday we also discovered “Junky’s”, a marine hardware store that had more “stuff” than I think I have ever seen before. Virgil, Junky’s owner, is a real character. His first love (other than his wife who is 25 years his junior) is Packard automobiles. He owns 15 of them. In addition, he had a DeLorean there that only had 1000 miles on it. The DeLorean was on a lift and covered by a canvas tarp but we got a sneak look at it when Virgil was looking the other way. Upstairs we found antique gas pumps in mint condition as well as shelves and shelves of automobile parts that likely were not for any automobile built after 1960. I asked Virgil about taking inventory and he said “That’s something we don’t talk about around here”. It seems that the last time he took inventory it took 7 people over 6 weeks. (no way they counted everything)

Today we were a bit bored so Steve and I took the local bus for it’s loop around Westport. The best 50 cent ride I have had in years. Mid way through the loop, I spied a barber shop and asked the driver if I could get off and catch her on the next trip around. Steve stayed on the bus and 30 minutes and an inch off the top later, they came back by and picked me up.

Well, that’s all there is to report from here in Wobegone……er Westport except to say you know you’ve been here too long when Bill at the fuel dock waves and says “good morning, Peter”. (how’d he remember my name?)