From ….. This past week is somewhat a blur. Or maybe I should say a “murk”. When we arrived in , the first day or two were very nice but then I think the weather directors thought it was June as June gloom set in and it became murky. It is even gloomy here in as I write this. Hopefully by we will see some sunshine.

Steve and Tom departed for home on Saturday the 27th and I was left to straighten up and clean (the ”guys” mess) for when Jan would arrive on Tuesday. The fires in left a coating of ash on all the docks and ramps so every time I left the boat and then re-boarded, I left gray footprints. I solved part of this by washing the dock areas on all of the approached to the boat. This took time, but did keep the boat a bit cleaner in the long run.

Jan arrived on Tuesday and we set about shopping, stowing and generally preparing for the beginning of FUBAR. I visited the West Marine store about twice a day on average and I think if you check their stock prices, they must have gone up last week. I am sure that now that we have left, there will be massive layoffs at West Marine. There were so many things that I never realized that we needed. A dinghy anchor, dinghy anchor rode, new CO2 cartridges for the PFDs, wash buckets, scrub brushes, letters to mark the dinghy: T/T Nor’wester and then there were the numbers to place the documentation numbers in the engine room. We had just received the new official number and I had not yet marked the boat. The Coast Guard wants it to be in 3” numbers and in a manner that it would be very apparent if the numbers were altered or removed. I thought that the best way to do this would be to use the vinyl numbers and then to put a single layer of glass and resin over it so that it was still readable, but protected against altering. Well, can you believe that at West Marine I was able to get all of the letters and numbers I needed except for the number “5”. I could not find a number 5 anywhere that I went. West Marine was back ordered on that number and the other marine stores I visited didn’t have one either. I did find one in white color but that doesn’t do me any good as the rest of the numbers are black and it is going to be placed on a white stringer and wouldn’t be seen. Well, I finally settled for getting a couple of other letters that could be cut and a 5 could be made from them. I bought a white number 5 to use as a pattern. I decided to just put the numbers on the boat and let our fiberglass experts cover them when the boat returns as I think they would do a much neater job than I could do. I hope the Coast Guard will understand.

Saturday we went to Fiddlers to get checked in and receive our participants’ packet. Representatives from Cruiseport () were there to help us with Mexican immigration papers and it was a smooth process to get checked in. They provided us with a Fubar bag that was loaded with goodies including a spiral bound set of Mexican charts. We have Nobeltec with all of the charts installed, but the addition of the paper charts is comforting if the computer crashes.

Before we had left Anacortes, we had tested the BAT drive get home system and found that while it worked great, we were only able to get 2.5 knots out of it; hardly enough to make much difference if we had an engine failure in any sea state other than flat calm. It was determined that the hydraulic motor that was installed required too much hydraulic oil flow for what the pump on the genset was able to produce so the pressures would drop and the speed would then suffer. We had a motor air freighted in and found Viking Marine to install it. The motor is located under the main shaft at the aft part of the engine room. Numerous hydraulic hoses, valves, and a corner of the genset complicate things further. Joe and Kane both looked at where the motor had to go and soon decided that reinforcements had to be brought in. Kane called his daughter, Sydney, who is very petite and she was soon crawling under the engine and all the way to the back of the bilge. 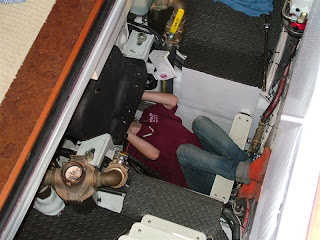 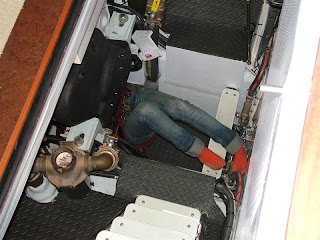 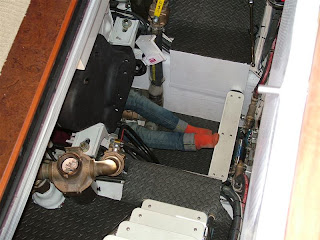 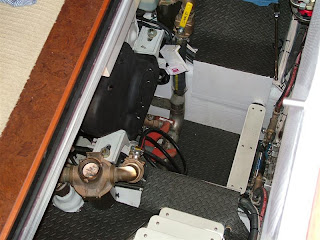 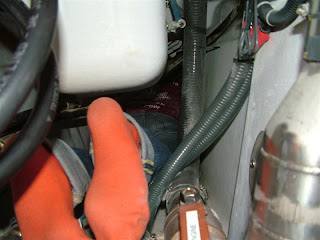 This reminds me of the scene in the Wizard of Oz where the wicked witch’s feet are sticking out from beneath the house that has fallen on her.

Between Joe, Kane, and Sydney they got the motor changed and when we tested the BAT drive, we were able to achieve the 4 knots that we had expected. deserves a medal.

Bruce and Janie Hinds, our dear friends and the couple that introduced me to Jan, arrived on Saturday night and are our honored crew for FUBAR. We always enjoy their company and have spent many wonderful times with them in the past, but never a boat trip of this length. Bruce is so excited to be doing an offshore trip as this has been his dream for many years. Janie just hopes she doesn’t get seasick.

Sunday we had breakfast at “Point Break”, a great little restaurant just off . Then we did a little sight seeing that took us to “”. I had not been there for years, but my memories of great margaritas a one of the restaurants there had us making a beeline. Unfortunately, it was too chilly (remember the gloomy weather) for us to sit outside so we opted to go back to and have an early dinner at Miguel’s. Yum!!!

Last Monday night was the get acquainted party that was held at the Portuguese Hall on . The food, beer, wine and camaraderie was wonderful. For the first time we met many of the other skippers and crews, all of whom were as anxious as we were to be underway. We saw our friends Natalie Friton and Amy Pinter from Passagemaker Magazine and met Bob Jones of Ocean Nav that had provided us with the excellent weather routing on our trip down from Anacortes. Bruce Kessler and his all volunteer crew from the Del Rey Yacht Club did a great job of organizing the event.

Tuesday was for last minute provisioning and stowing of “stuff”. I made a quick stop at the Village Marine office to make sure I had a complete understanding of how the watermaker works. I met Gary Foster who was very helpful and he explained the operation of the watermaker much better than the instruction manual did. I also learned that was a retired navy chief sonar tech and also a submariner. As I had spent 4 years in the sub services as a sonar tech, we had much to talk about. He was about 8 years behind me, but the equipment and ops drills that we did were the same. I had not talked “sonar” to anyone in many years and it was a bit of nostalgia.

Wednesday morning dawned, guess what…….gloomy. We left at 7am and fell into line with several other FUBAR boats. We had 2 large Nordhavns ahead of us and 2 small Nordhavns behind us. The trip down to was very uneventful. Seas were calm, wind was nil, and visibility never got above about 3 miles. 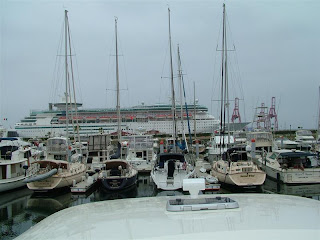 We arrived at Cruiseport Marina at 3pm and found that this marina has the same problems with dirt as we had in , though this time it is the soot from the generators on the cruise ships that make the docks filthy. So we did the same drill as before,,,,,wash the boat, then scrub the docks around the boat. 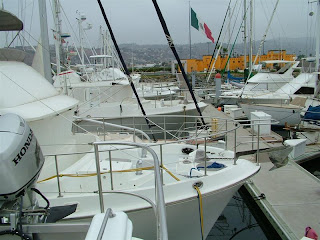 Our slip is along, what I call, Nordhavn Row. There are 5 Nordhavns next to us; (3) 43’s and (2) 40’s. With the addition of the FUBAR Nordhavns, they have cornered the market here. (I think it is appropriate for us to be here.) We walked ashore to town and had a fabulous dinner at Mahi Mahi, a local favorite restaurant. Bruce and I had the garlic swordfish, Jan had the garlic mahi mahi, and Janie had the Mahi Mahi shrimp, a coconut crusted shrimp dish. Yummy!!!!

Today we will go ashore and search for yet another coffee grinder. I had replaced the previously reported failed grinder with a similar one thinking that lightening never strikes twice in the same place and this morning when Bruce went to grind the beans, it didn’t work. Sniffing the bottom revealed a strong burned electric smell so I guess that there must be an inherent problem with the Mr. Coffee grinder. Luckily there is a Costco and Walmart here in so replacing it should be easy. (We won’t be buying another Mr. Coffee) 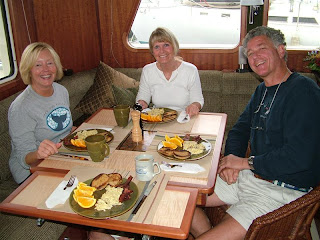 The weather is still gloomy but our spirits are high. Here are Jan, Janie and Bruce at our breakfast table aboard. Jan made a scrumptious scrambled egg, bacon, english muffin and oranges breakfast. Tonight is another party here at the marina. I will report again tomorrow, assuming I still have internet access. If not, then at the next opportunity.