Larry and Linda Hansen returned from their 2.5 month cruise north to Glacier Bay this past week. Larry sent me the following pictures note to tell us of their adventures. With their permission, I am sharing it with you below. 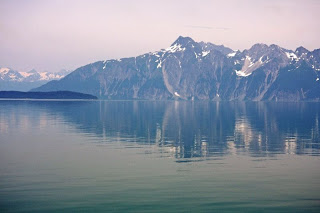 Orca Blue has completed her journey to South East Alaska and back. We were gone 2 ½ months and logged over 3000 miles. It has been a great adventure to say the least. Orca Blue plowed thru everything we asked her to. Many times the large passages were like glass and to be expected there were those times where conditioned challenged Orca Blue’s abilities. She never faulted or caused us to question her abilities to get us through safely. 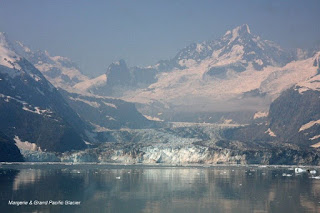 We took a short one week break from to get a grandchild fix back in . They returned with us to Wrangell for 5 days near the end of June. It was great for them to see some glaciers, catch Halibut and leave with a taste of . On their departure we headed north again through the Wrangell narrows. Which, by the time the trip was over, we would have transited 4 times. Some of the areas we went through were so remote that days would go by without seeing another boat. We again worked our way up into the head of Tracy Arm reaching a point only a half mile from the glacier face. 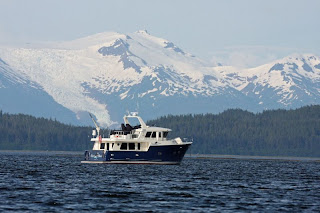 The small and large icebergs blocked our way and kept us from going any farther. 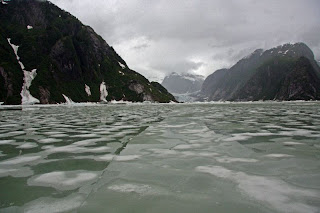 There was spectacular scenery in every direction. Fantastic vertical rock cliffs come directly down into the sea. You could be 100 feet off shore and be in 600 ft of water. 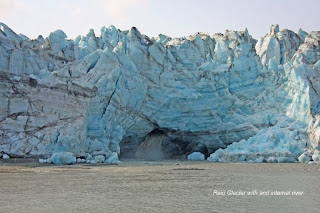 Our trip destination goal was . We arrived there on July 8th and were able to get a 5 day pass. They only allow a set number of boating into the park at any one time. The park is huge, taking more than a day to cruise to some of the upper reaches. Every day the weather was beautiful. Light winds and blue skies. There was a little smoke from fires in the but in general the weather was perfect. One night we anchored right at the foot of Reid Glacier. Along about dusk we got a chance to experience our first “Williwaws”. These are winds that are generated by the air cooling on the glacier face and sliding down hill along the glacier picking up speed as they descend. On reaching the foot of the glacier, where we were, they had picked up speeds in excess of 35 mph. For 2 hours we had an interesting ride, at anchor, until it died off to nothing about 11 PM.

On our second day in the park we got right up to the face of Margerie and Grand Pacific Glacier. There were no other boats in sight. We stopped at the face, shut everything off and went up to the flybridge. We sat there, with a glass of wine and cheese watching and listing to the glacier for over an hour. It was truly a great experience to say the least.

With our major goal achieved we began working our way south. Sometimes we were making more than 100 miles a day. The major passages south through the Dixon Entrance and were timed with good sea conditions and were not a problem. 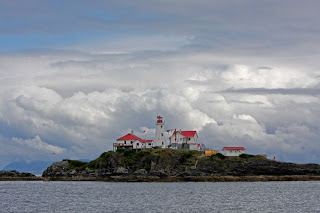 One evening we timed our arrival at in Grenville Channel and worked our way through a twisting 80 foot wide passage into Baker Inlet. 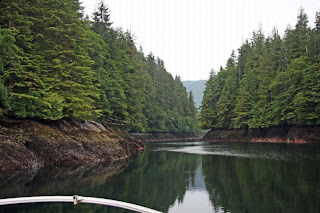 You can only do this at slack water because the current can run through the narrows at 8 to 10 knots. So once you get in there you are locked in until the next tide change. Baker Inlet is a 3 mile long bay that had a great anchorage at the far end. Again we were the only boat there and in some ways felt a little claustrophobic, with the high mountains all around and knowing that you couldn’t leave even if you wanted too. The isolation was amazing.

Each day we were treated to some type of surprise. It may have been breaching Humpback whales, feeding Grizzly bear along the beach, mother Sea Otter with her baby on her belly, Orca’s hunting or the Eagles being driven off their catch by crows. 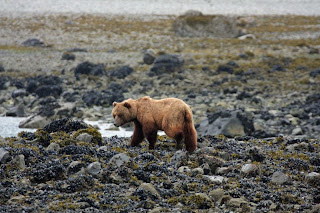 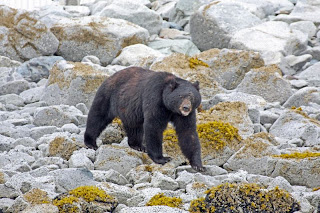 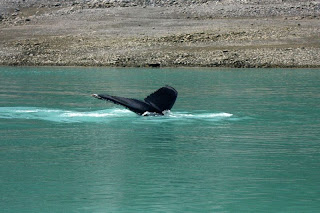 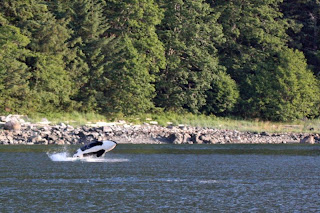 As it turned out one of our roughest rides was at anchor. We were returning south, through the Straits of Georgia, with a nice 10 knot wind on our tail and temperatures in the 80’s. We found an ideal anchorage on the south side of in , which is beautiful . Since it was Saturday night the bay was packed with over 50 boat ranging in size from 16 ft to 85 ft. The weather had been clear, sunny and a light breeze out to the north for days. It was predicted to stay the same for at least 3 more days, so we felt comfortable anchoring there even though it was exposed to the south. All went well until, about 7:00 PM, we noticed some large thunder heads developing over the mountains and . By 9:00 PM the winds began to slowly switch direction, now coming out of the south directly into the bay with a long 25 mile fetch. They began building to over 20 knots. As it got dark we were treated to a fantastic lighting show with multiple lighting strikes to the south every few seconds. Three large, 960 ft, cruise ships idled in the area waiting for things to settle down. By 10:00 PM we had 4 ft breaking rollers coming into the bay. Not a problem because our anchor held us directly into the waves. The smaller boats were taking a real pounding and by then it was getting dark so everyone was committed to spend the night. At around 11:00 PM the thunder storms were moving off to the west, which seemed like a welcome change. It wasn’t. The winds now changed direction to the west which rotated all of the boats into a position broadside to the large rollers and surf that were still coming directly into the bay. Many of the smaller boats, with the typical lunch hook ground tackle, began breaking free all in the dark. Orca Blue did just fine, but we did move our pillows out to the salon and tried to sleep there. That was difficult since we were up regularly fending boats away from us. Most of their crews were terrified. By 2:00 AM the winds rotated again, out of the north and things began to quiet down a bit. After a somewhat sleepless night we headed to for brief fuel stop.

That also turned out to be an interesting experience too. On arriving in we were surprised at all the boat traffic. We were greeted with a harbor that was alive with boats of all sizes going in all directions. People were lined up all along the shore line and fireworks were filling the sky. We felt all of this was a nice friendly welcome for the arrival of Orca Blue. But no, it was the beginning of their yearly Bathtub races. This is equivalent to Seafare in . Almost immediately we found ourselves in the middle of hundreds of boats rushing in every direction to follow the little modified bathtubs powered by big outboards. Chaotic to say the least. No fuel in that day.

It’s hard to summarize all of the cool things we saw in the 2 ½ months we were gone. It was a great adventure.

Peter, we were amazed at all the positive response the boat received everywhere it went. In especially, they all truly loved the boat. Almost every person walking the dock would stop and complement us on the “beautiful boat”. Many, would stop to ask about details. It was fun to hear their comments as they walked by on the dock. One day we were in Tenakee Inlet, one of the local fishermen came by to say he saw the boat in Wrangell three weeks earlier and how much he liked it. It was typical to be anchored somewhere and have numerous people dingy by to take pictures and ask where the boat was built. It made us feel good and I’m sure that you and Tom should feel proud of the product you have turned out.

Our thanks go out to all of the team that was involved with the design and fabrication of Orca Blue. 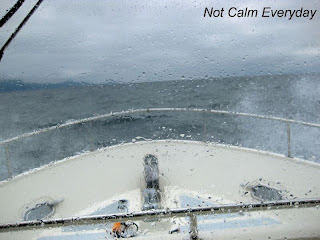 Not Calm Every Day 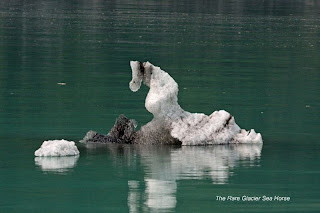 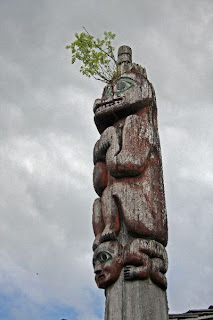 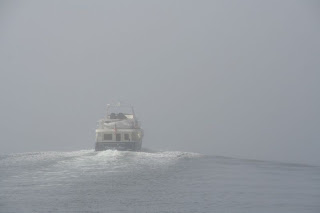