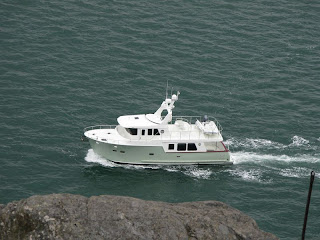 Please mark your calendars and plan to attend the Lake Union Boats Afloat Show on South Lake Union, September 16th thru 20th. We will be there aboard Shellfish, the Northwest 50EC (extended cockpit). Shellfish is truly a spectacular boat, having won the People’s Choice Award at the recent Trawlerfest held in Anacortes. 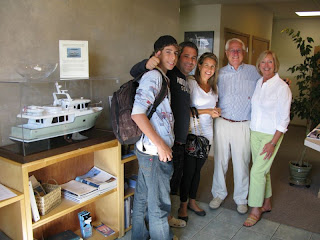 In the past couple of years, since launching our Northwest 45 (hull #1), we have had many inquiries from all over the world. Quite a few have expressed interest in coming to visit us in Anacortes to experience, first hand, the Northwest 45.

Several months ago, I received a very nice note from Alex Peraja, from Santos Brazil. He told me that he had been following the progress of Northwest Trawlers and really wanted to come to Anacortes to visit us. Plans were made for he and his wife, Giselle, to come to Trawlerfest this past May. Unfortunately, it was during that time that the swine flu was headline news worldwide. As a cautionary measure, they sadly canceled their travel plans.

Alex continued to write however, saying that he still wanted to bring his family to Anacortes for a visit to see the Northwest Trawlers. Well, recently, they made that happen. Alex, his wife, Giselle, and their son, Ian, came to visit; not only once, but twice within a week. They made a thorough inspection of Nor’wester and we went out for an extended seatrial. By the smiles on their faces, I could tell they loved the boat. When they left to return home, they told us they wanted to have us build them a NW45.

Sadly, that may not happen. The difficulty that they face is the very high import taxes for Brazil. The tax rate is around 100% of the value of the boat when it arrives. This means that whatever they purchase that is manufactured outside of Brazil costs twice as much as anything produced in Brazil. Unfortunately, they probably cannot purchase a boat made here in the US for as much as they love the Northwest 45, it does not make sense to pay twice the price.

Alex, however, is not one to give up on his dream easily. He believes in the old adage: “where there is a will, there is a way” and he is determined to find a way.