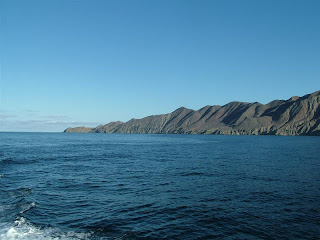 On the Way to Mag Bay
It was a quick 3 hour run down to Mag Bay with calm seas and beautiful clear, sunny skies. We were one of the first boats to enter the cove and before we could even get the anchor down, a panga approached with a local fisherman grinning and holding up 4 lobsters that he would gladly sell us for $1 apiece. I only had a $5, so he through in 2 additional smaller ones instead of giving change. 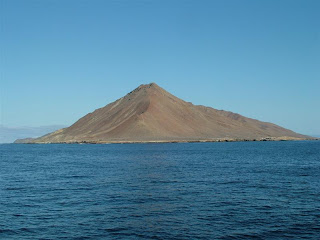 Right after that, another panga approached, this time with a better dressed driver who had his briefcase with him. This proved to be the port captain who would board us for our first boarding by a Mexican official. He spoke little English and we even less Spanish but with gestures, smiles, and a few words, we understood that he merely wanted to see our crew list and a copy of our documentation papers. After we signed his official log, we asked him to sign our guest book which he did with a big smile. After many “mucho gracias’s” and more smiles, he got back in his panga and headed off to the next arrival who had just anchored.
Word spread fast that there was to be an impromptu potluck dinner ashore that evening. Bruce Kessler had arranged for a local restaurant (read shack that prepares local fish for the locals) to allow us to use their outdoor facilities for our party. Everyone brought wonderful dishes that they had prepared and the restaurant had beer and soda for $1.50 each. Eric Leishman, Jim Leishman’s son, had speared a 60lb grouper earlier in the day and restaurant cooked it. (Jim is one of the founders of Nordhavn). Everyone had much to eat and drink and it proved to be one of the best gatherings so far. It seemed that we now all were getting to know one another better and friendships were beginning to form.
We returned back to the boat early as we had not yet cooked the lobster. They had been awaiting their fate in a 5 gallon bucket filled with seawater. I steamed them and we ate half of them with garlic butter and put the other half away for a lobster salad.
Again we retired early because we have another overnight run beginning early the next morning.