We slept in this morning as we didn’t need to leave for Cabo San Jose until mid morning. It is a 20-22 hour run depending on sea conditions. The morning was quiet with smooth seas. Some time after noon we saw several marlin jumping in our wake. Oh to have a fishing rod….. A little bit later we saw a school of dolphin off the starboard bow and soon they joined us for a free ride. 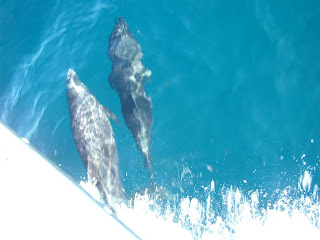 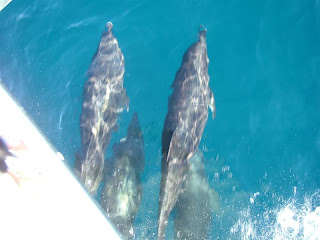 Then there were 4
Actually there were a lot more, but these were the only ones I could catch on film.
The day wore on and finally it was time to prepare dinner. I fired up the grill and soon had a pork loin cooking while we were 50 miles offshore. We have some electric candles that we set up at the pilothouse table and we all enjoyed a sumptuous pork dinner. (sorry no wine, we are on watch, you know).
The winds continued to rise slowly throughout the night and we were really rocking and rolling by the time we rounded Cabo San Lucas at 5AM. I am really sorry it was dark and I was unable to capture a photo of the stone arches that are so famous there.
We arrived in Cabo San Jose about 7AM and were greeted by Jim Effers (sp?), the marina manager, on channel 22. The marina is brand new (read, not yet completed) and we were very fortunate to be assigned a slip in the completed area. This is a very modern marina which is going to be one of the central amenities in the Puerto Los Cabos resort area which encompasses over 2000 acres. In addition to the marina are several upscale housing developments as well as 2 golf courses under construction. This is quite the spot.
We were getting low on some grocery items so we grabbed a cab and headed for town and the local Super Mercado. After returning, Bruce and I dinghied around the marina before we all headed over to the evening event at a local outdoor restaurant. 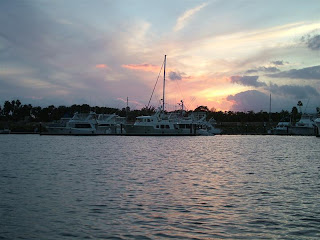 Looking to the West
The above picture was taken from the center of the fairway looking at Nor’wester to the west at sunset. Bruce and I just sat and drifted in the dinghy watching the pelicans fishing for dinner for about an hour. They are fascinating to watch. 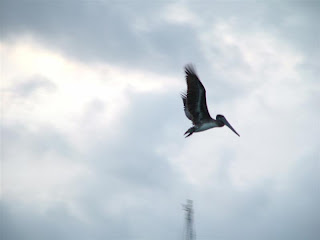 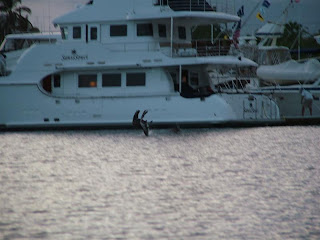 We had yet another Mexican dinner of tacos, rice, and beans (this is getting a bit old). The ambiance was pleasant and being in the company of roughly 200 fellow travelers gave us a lot to talk about. We spent quite a while talking with Bo Larson, the skipper of Cadenza, a Nordhavn 78 that is powered by a Siemens diesel electric power plant. We took dessert “to go” and returned to Nor’wester and had carrot cake and tira missou. Yummy!!! 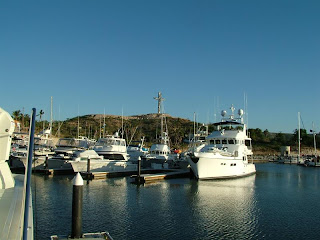 Sans Souci in the morning sun

The next morning dawned bright and clear. The above picture shows the cross on the hill and another section of the marina. Morning chores and then we got a tour of the resort area and then a reception at the beach club complete with mariachi singers. After the reception, Bruce, Janie, Jan and I went to town for dinner at a local restaurant that caters to gringos. Bruce I had Ahi tuna;Jan had sea bass; while Janie had crab. Yummy again!! 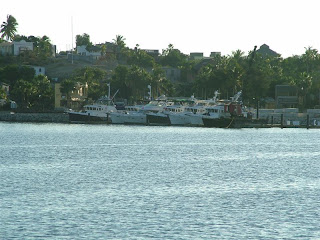 Above is another angle of the marina. This is where most of the Selenes ended up. Unfortunately there was no power or water installed yet.
Tomorrow, off to Muertos Cove……