to Bahia . We left at about 7am as the trip should take about 27 hours or so and we want to arrive early Tuesday morning so we might enjoy a day of swimming (if the water is warm enough) The trip was uneventful and we averaged 9 knots as we had a bit of a push by the currents, winds, and waves. We alternated watches and I took the mid watch (midnight to 4). We arrived in Bahia Santa Maria about 8:30am and found a great anchoring spot in 28 feet of water. Bruce decided to put the tender in the water while I completed shutting down the boat’s electronics and setting things up for our 24+ hours here. I heard the davit begin to lift the dinghy followed by a loud “thunk”. I ran up to the boat deck and saw Bruce standing there frowning and muttering to himself. He had inadvertently hit the up button when the cable was already at it’s highest point and the strength of the winch had snapped the cable. Luckily, he had not yet attached the cable to the dinghy or he would have dropped the dinghy. Initially we thought we would be tenderless for the rest of the trip but after some thinking and a radio call, we located two boats who each had a cable clamp aboard. While in , I had purchased yet another Dremel ( I have 2 at home) and with the grinding wheel, it was simple to cut the stainless cable and by using the 2 cable clamps donated by the 2 boats (Voyager, a Selene 53 and sailboat close by). We were soon able to get the davit working again. 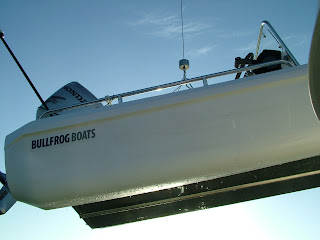 We put the tender in the water and Jan and I went exploring. We went up to the fishing village (just a few old shacks on the beach) and negotiated our way through the surf line and into the lagoon. We dinghied up the lagoon for about a mile until we started to “dredge” the bottom with the motor. We turned around and started out the lagoon and cross the surf line again. This time I was not as good (or lucky) and we caught a breaking wave over the side of the dinghy. Again, I was drenched, but the Bullfrog dinghy proved itself very stable and able to handle the approximate 20-30 gallons or so of water that came aboard. I turned on the bilge pump and we were soon pumped out. That’s when Jan pointed out that perhaps we should have tried to exit the lagoon a bit more to the left, where the surf wasn’t as large. Oh well, I learned a lesson…..

There was a party scheduled on the beach tonight, but after watching the pangas trying to negotiate the entrance to the lagoon at about 2 hours before low tide, we decided to stay aboard and do our own thing. We had a delicious dinner of blue cheese burgers and salad and then watched 2 episodes of “Planet Earth”, the marvelous production done by the BBC. Early to bed for a good night’s sleep.