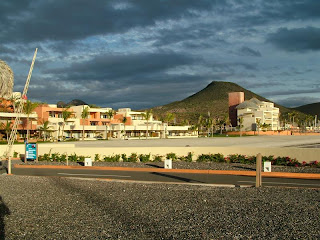 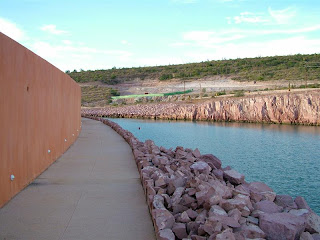 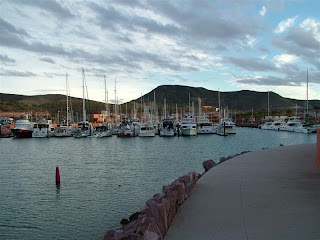 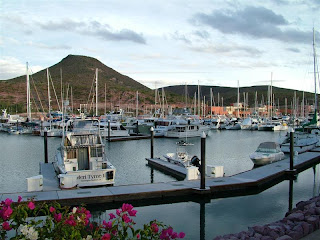 The past 2 weeks have been a bit busy. Thanksgiving day we spent with the Club Cruceros group for a pot luck Thanksgiving dinner. There were over 200 people there and the food was terrific. The club is a group of mostly American cruisers of both power and sailboats who have made La Paz their home base from which to go cruising. The number and makeup of the people is constantly changing, but the goals and lifestyle of the membership never changes. They support a local orphanage here in with several fund raising events throughout the year.

The week following Thanksgiving, Doug, a client from , came down to visit us and take a sea trial on Nor’wester. This was part of his decision making plan and as per Murpy’s Law, the weather was forecast to be snotty for the time he would be here. We left the harbor in a light norther and were able to show the capabilities of the boat successfully. Doug had been reading our blog and knew of our coffee grinder woes. We all had a big laugh when shortly after he arrived, he opened up his carry-on bag and presented us with a brand new Braun coffee grinder, guaranteed to last for many years (so says Doug).

Today, Club Cruceros had their annual Subasta (auction). The items auctioned were mostly unused boat items that have been donated by the Club Cruceros members. They also had several food booths and a couple of baked goods tables. We found wonderful apple pie and banana bread there. There were also several local artisans displaying and selling their wares. We bought 2 Mexican decorated, hand made coffee mugs.

The weather has been quite pleasant overall. The temperatures are in the low 80s during the day and in the upper 60s at night; perfect sleeping weather.

Tomorrow I must return to Anacortes for a couple of days. Jan will remain here and watch over Nor’wester. We have some important decisions to make and it is best I be there in person. I will report on what is happening there in my next post.