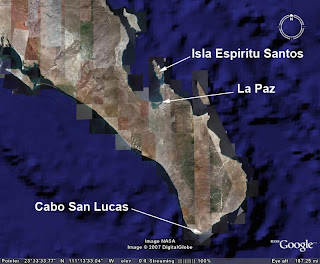 Today we took potential clients (who have become friends) on an extended sea trial to Isla Espiritu Santos. This is an absolutely gorgeous island that is about 18 miles from Marina CostaBaja where we are moored in La Paz. Much has been written about Isla Espiritu Santos and the neighboring island, Isla Partida. This is a wonderful area to spend days or even weeks anchored, enjoying the warm, clear waters for swimming and snorkeling or dinghying around the bays to see the wildlife. 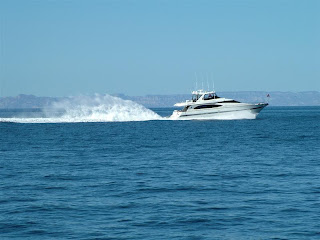 On the way up, we were passed by this guy going about 25 knots. Doesn’t he know there is a fuel crisis. He must be burning several hundred gallons an hour. It is hard to tell, the boat is probably about 85 feet long. I wonder if he realized how ridiculous he looked. 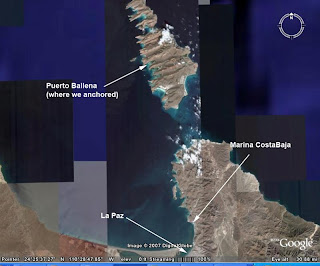 Anyway….we made a leisurely 2 hour trip up to Puerto Ballena where we decided to stop and anchor for the afternoon. 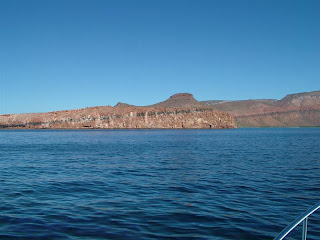 This is a shot as we approached Puerto Ballena. You can see the layered rock. The dark layer is lava and the lighter colored rock is volcanic ash. What you are seeing in the picture is actually a small island as we approached the bay. The island’s name is Isla Galo. 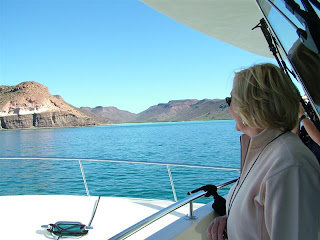 Jan is checking out the layered rock. I wish I had a polarizing filter so that the pictures would show the true color of the water. The aqua blue greens are only what you see in travel brochures. 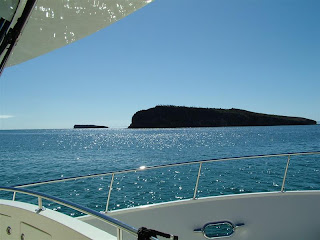 Here we’ve rounded up and dropped anchor in about 18 feet of water. We could look down and see the anchor below us as clear as looking through glass. The island in the foreground is the back side of Isla Gallo and the island in the background is Isla Gallina. 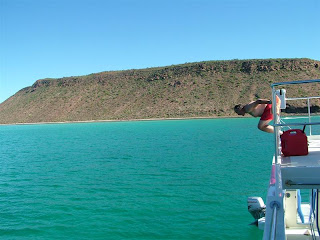 Larry couldn’t wait to go for a swim. The water temperature this time of the year is about 75 degrees. We have noticed that it has dropped about 6 degrees since we arrived on the 19th of November. 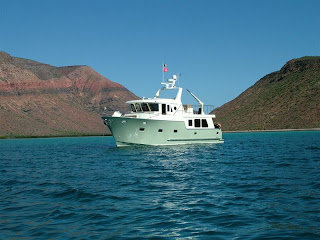 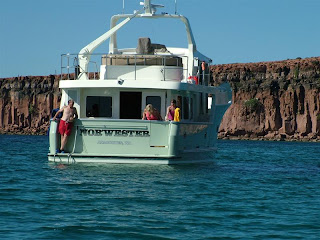 I jumped into the Bullfrog (dinghy) and sped off to get a couple of pictures of Nor’wester. We were the only boat in the entire large bay. We were at anchor here for about 4 hours and in that time I think 3 pangas with tourists came through the bay, but they didn’t stop and didn’t bother us at all. We had a great lunch that Susan prepared and soon everyone was basking in the sun. 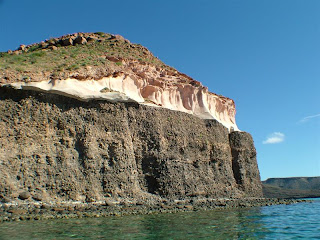 After a short rest, we all jumped in the Bullfrog and explored the rest of the bay. We could see sting rays and small manta rays darting in the shallow water beneath us. There were brilliantly colored angel fish and we all wished that we had enough snorkel gear (and time) to do some snorkeling. 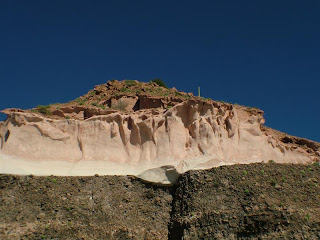 The sky is almost cobalt blue. Note the erosion that has been occurring for the past several thousand years. 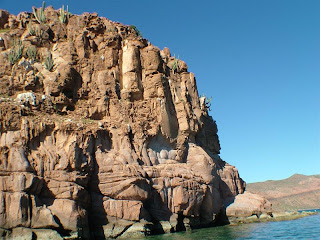 Here we approached Isla Gallo. Again, we could see lots of fish beneath the surface. None of the pictures I took came out, though. (operator error) 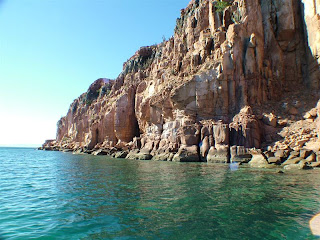 This is looking back the other way at Isla Gallo. Also in great abundance were the birds. Frigate birds circled overhead, gliding on the eddys and taking advantage of the updrafts. 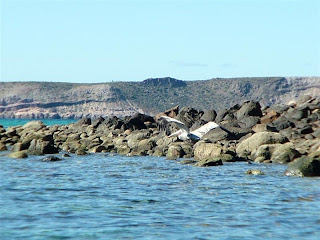 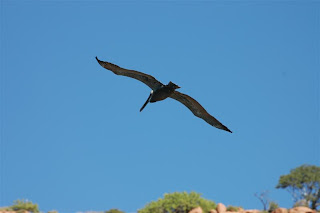 The other thing we saw a lot of was the Mexican Air Force which is better known as pelicans. They were everywhere. They love to fly in twos and threes in formation, gliding just inches above the water. They can go a long way without moving there wings at all. This one above is not really gliding, he had just taken off and Jan snapped the shot. 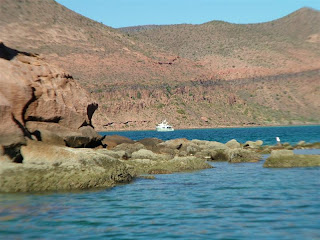 I couldn’t resit one more shot of Nor’wester in the bay. 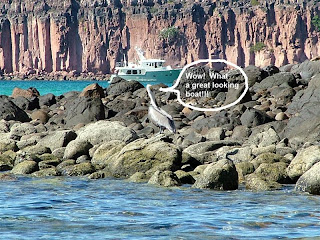 Before we went back to the boat, we decided to stop by and ask a local his opinion. Pelican’s never lie. This guy will be our friend for life!!!

It was back to the boat, lift the anchor and head on back. A truly marvelous day that we topped off with a scrumptious dinner at the Azul Marina Restaurant with a Mexican version of paella and shrimp.