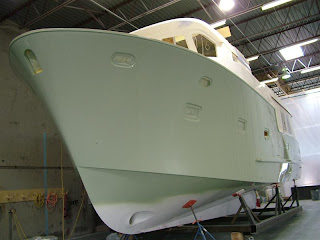 Ok…..I wasn’t going to show pictures of the painted hull until later, but the cat is out of the bag so here they are. The picture really doesn’t do it justice as the shots were taken inside the darkened building. The color is “Laurene Green” and is really spectacular. (not my words but those of a client) The color was not blended or named originally by us, but rather by Bill Parlatore of Passagemaker Magazine. Named for his wife, Laurene, it is the color that Bill originally painted his rowing scull; the one featured in Passagemaker last summer. 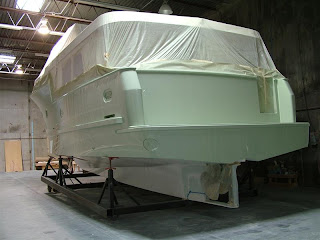 Here is a shot from the stern. The bottom paint will be black and the boot stripe will be painted the same Oyster White as the superstructure. 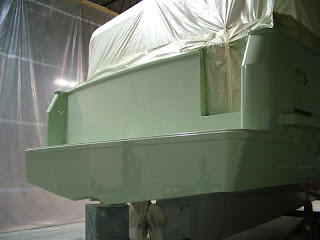 Here is another stern shot. Note clarity of the reflections. The hull was actually painted about 10 days ago and I took these shots about 8 days ago after it had cured for a couple of days.

Work is really progressing now as our completion deadline approaches. We have had a few challenges with suppliers getting us key components on time. One issue has been the curved glass for the pilothouse. We are told that it should arrive next week, but then again, we thought they would have it here by last month. 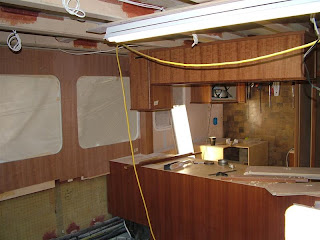 The galley is coming together. Also note the veneers are on the side bulkhead. 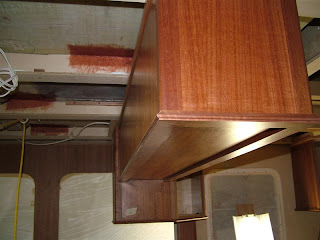 This picture gives you an idea of the detail of the moldings. Dan and his crew are really talented. 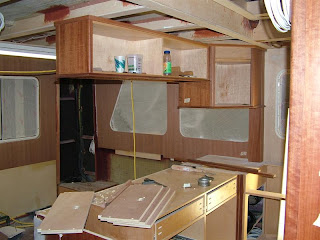 Measurements were taken yesterday for the Avonite counter tops and they should be installed in a couple of weeks. 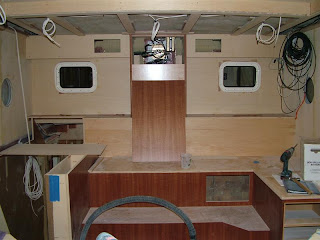 Scott has been busy in the pilothouse. The Diamond Seaglaze windows are in, the shelf is complete and the seating areas just lack moldings and cushions. The interior design group will begin with the wall coverings in about 3 weeks. It will only take them a couple of days to complete.

We hope to splash the boat again for a seatrial before completion. I think we will start the engine and run the systems this week with the boat still in the shop. They loaded 300 gallons of fuel today and calibrated the sight gages as the fuel went in.

There is an army of workers now working 20 hours a day (in 2 shifts) to complete the boat. With no hiccups, we should be ready in time for the Seattle show. See you there!!!!