Once again I must apologize that I have not posted lately. With the scramble to complete the boat before the Seattle Boats Afloat Show, I have been spending most of my time on the shop floor, not in front of my computer.

After much thought, a name has been chosen. “Nor’wester” seems very appropriate and there are not many Nor’westers out there. The most famous Nor’wester is John Wayne’s first yacht, a 75′ wooden boat built in 1932.

Last Saturday we put Nor’wester in the water for a short sea trial. Below are a few of the pictures taken from the chase boat. 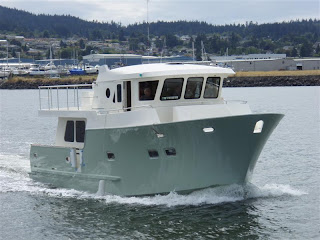 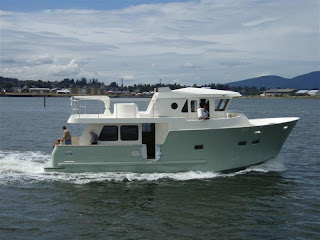 These first 2 pictures were taken at about 8 knots. Nor’wester was extremely responsive with the articulating rudder. At idle and in gear, with full rudder, the boat moved in a complete 360 degrees in little more than the length of the boat. 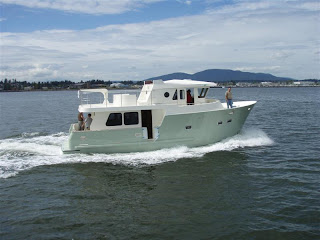 Here is a shot of the boat at about 11 knots. We only went up to about 12.5 knots in this first sea trial. We have a bit of “tweaking” to do, which is expected on a new design. With the stabilizers (drag) and extra weight of the options, we expect this hull will be at the lower end of the performance specification range. We were very encouraged to see that our tank testing proved out and that at higher speeds, the bow did not rise more than a couple of degrees. Great hull design, Stuart (Archer). 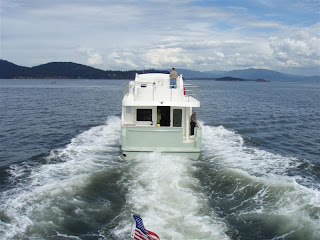 This shot is at 12.5 knots. Nor’wester was moving ahead of the chase boat, a Skookum, which can only do about 8 knots. 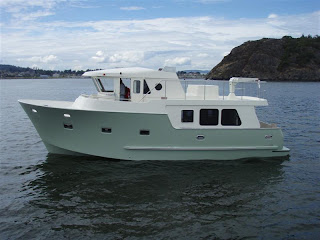 Here is the port side. She sits with a slight rise of the bow but the anchor roller, chain, anchor, etc. have not been installed yet. We had full water tanks (aft) and a bit over 300 gallons of fuel aboard. In addition, there were 10 good sized passengers aboard.

Nor’wester is back out of the water now for the final installation of hardware, flooring, carpeting, headliner, etc. We expect to do a second sea trial in early September and then its off to the show.