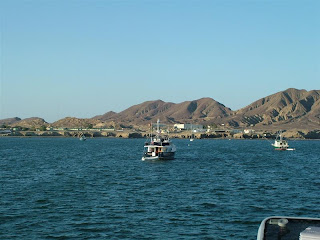 Bahia de Tortugas () We are anchored in the northwest part of the bay, just off the small fishing village. The fleet is split into two groups, one here and one just off the beach where we will party tonight. We launched the dingy and explored the anchorage, stopping to say hi to anyone out on deck. We are starting to get to know some of the other cruisers and they in turn, us. It is great to hear all of the positive comments about Nor’wester. While most of those in the fleet are aboard very nice boats, they still want to know all about the Northwest 42.

We are busy hosing off the salt on the boat and organizing after the 30 plus hour cruise here from . The water is getting warmer, but at 68 degrees, it is still a little too chilly for swimming. 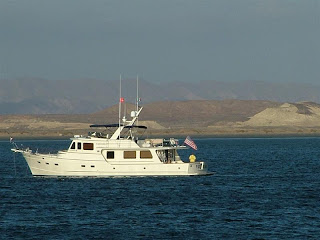 This is Tony Flemings Fleming 65, Venture. We spent a delightful hour chatting with him at the party and learned the history (and future) of Flemings. Tony is truly a gentleman. His plan is to cruise the Baja area for a short time then take Venture down the coast, through the Panama Canal and up the East Coast to eventually spend time cruising the St. Lawrence Seaway. It was great to get to know such an icon in the boating industry.

Later……We arrived back from the party…..what a hoot!!! We were picked up in a panga (Mexican skiff about 16-20 foot long) and whisked to shore. The surf was just a bit too high with the party going till after dark, it was recommended that we not use our own tenders. We had salsa and chips, margaritas, cervezas, tamales, taquitos and beans as our Mexican “gourmet” meal. The most interesting part was the trip home. The combination of the surf, the number of people who wanted to return at the same time, and low tide made getting off the shore a slapstick comedy event. I ended up having to wade out to waist deep water while helping to push the panga off the shore. I got soaked. Then, in the dark, we couldn’t find Nor’wester as I had neglected to properly turn on the anchor light and to conserve power; we had only limited lights illuminated. We eventually found her (how else could I be writing this) and spent a peaceful night sleeping aboard.