Jan and I have been members of the San Juan Island Yacht Club for many years. We have not, however, attended any events that they put on since we moved from Friday Harbor to Anacortes about 5 years ago. Consequently, not many people from the yacht club had ever been aboard Nor’wester to see it. When we got a call last week from a member, encouraging us to participate in the Vice Commodore’s Cruise to Ganges (Saltspring Island in the Gulf Islands of BC) and open up Nor’wester for display, we thought it would be a great idea. We hastily put together clothing, provisions, etc., got a pet sitter for the cats, and off we went. The weather could not have been more spectacular. 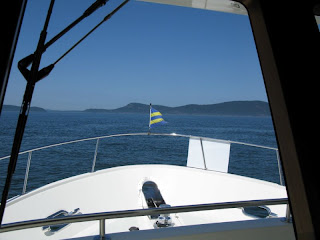 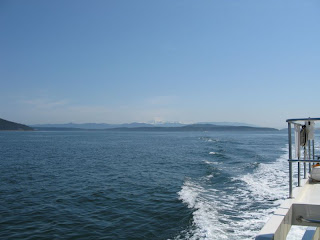 Not A Cloud in the Sky

It is about a 5 hour run to Ganges, not counting the diversion to Bedwell to clear Canadian Customs. 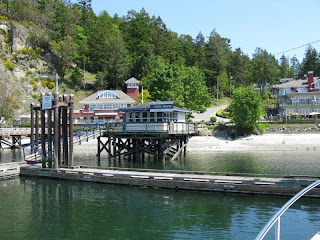 Canadian Customs Office
It was interesting to clear customs. When I checked in at the office, there was an officer there and 2 more out on the docks. He told me that they were technically not there and that I should call Canada Customs from one of the 3 phone booths right outside the office. I placed the call, gave them all the requested information, and was told to go back aboard the boat and an officer would come down shortly. I did as requsested and soon 2 customs agents came up to the boat and proceeded to ask me all the same questions that I had just answered to the agent on the phone. The one that got me was: “Do you have any firearms on board?” “No,” I replied. “Do you have any firearms at home?” “No,” I replied again, wondering what that had to do with anything. “So I won’t be surprised and find any ammunition aboard”, he said. “No”, I replied.
“If I don’t own a gun, then there is not much reason for me to have ammunition.” He just smiled and went aboard. The next thing we heard was the two agents opening drawers and cabinets to verify that we had told them the truth. After about 10 minutes, they got off the boat and said “Enjoy your stay in Canada,” and they walked on down the dock to the next boat. While the customs agents were on board, we struck up a conversation with a couple who arrived while we were standing there, only to realize that we knew them through mutual friends. Dennis and Julie Fox, who own a Krogen 48 (Julie K) are good friends with Bruce and Joan Kessler (Spirit of Zopilote). Dennis and Julie participated in the Atlantic Rally which was sponsored by Nordhavn back in 2004. They were aboard the only Krogen to make the crossing with the group. After the rally, they went on and cruised extensively before shipping their boat home. 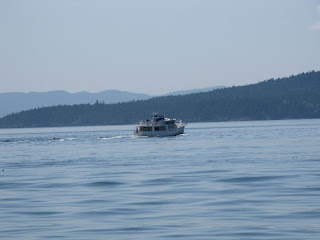 Julie K on the Way to Ganges

We were soon on our way to Ganges, about an hour’s run from Bedwell. Julie K was going there also to join friends for the weekend so we traveled with them. As we got ready to cross Swanson Channel between North Pender Island and Salt Spring Island we saw a BC Ferry bearing down on us. 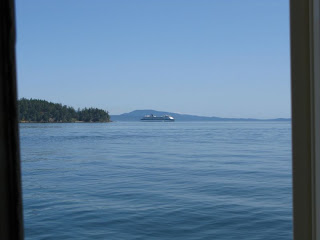 The AIS display said it was going 17 knots and the CPA (closest point of approach) was about 200 yards. Since we were running with Julie K, we decided to slow down and divert to the east rather than speed up to cross the ferry’s path. 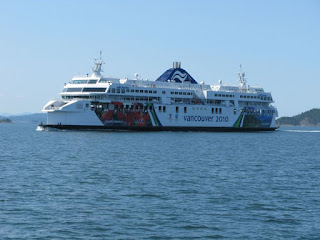 The BC ferries certainly know how to market. This one is advertising the upcoming Olympic Games in 2010, being held at Whistler, a winter playland near Vancouver.

Safely by the ferry, we continued on to Ganges where we were greeted by the SJIYC welcoming committee who helped us get tied up at the end of B dock at Ganges Marina. 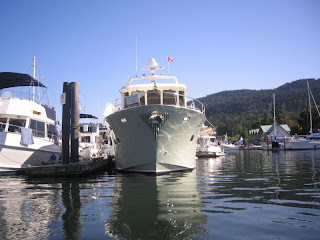 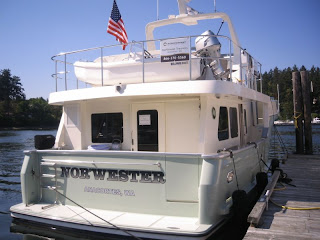 Friday night was “heavy hors d’oeurvres night, which meant we feasted on some magnificent offerings brought by the 70 attendees.

Saturday morning, we went to the Ganges Saturday Market 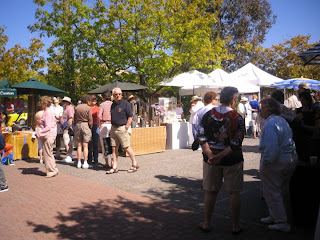 Here we found wonderful goat cheeses, breads, jams, and a lot of other calorie laced goodies. One highlight of the morning was to encounter this little girl playing the harp. She kept us spellbound for several pieces that she played. 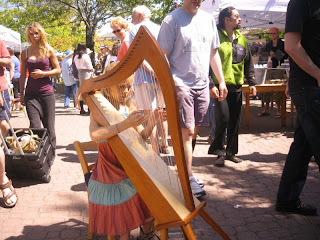 And of course, no trip to Ganges is complete until you browse Moats. Moats is a store that if they don’t have it, you don’t need it. 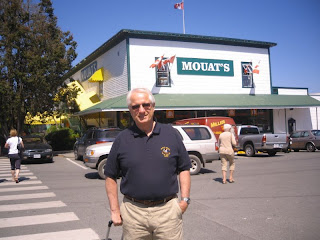 Back to the boat with our booty and of course, it was dead low tide; one of the lowest tides of the year. Jan could not resist snapping my picture after I had negotiated the steep ramp. 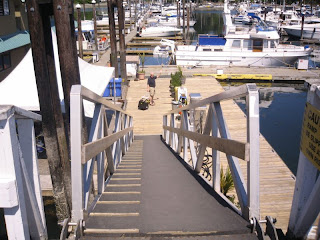 The second night, we took the dinghy over to Moby’s dinghy dock and walked accross the street to have dinner at the Harbor House. We could have walked, but the dinghy is way more fun. The Harbor House served us a very nice buffet and all 70 club members enjoyed themselves.

The rest of the weekend, we spent relaxing, reading, visiting and most importantly showing Nor’wester to the many members who wanted a tour. I think that nearly everyone there came aboard to see the boat. I think that there were a couple of people who may be interested in having us build a boat for them. Time will tell.

Our trip home on Monday was uneventful, though the current was running against us nearly the whole way. Our timing was not good for our arrival back in Anacortes as the CBP (Customs and Border Patrol) agents had just left to clear in the Sydney Ferry and it was over two hours before they returned to check us in. Before we go to Canada again, I am getting the I68 and Nexus pass applications in so we don’t have to be delayed.