We are thrilled that the attendees at Trawler Fest, Anacortes have chosen the Northwest 50 as the recipient of the “People’s Choice Award for 2009.

We had hundreds of people aboard during the 3 day event. We lost count of how many wonderful compliments we received but the biggest compliment of all was to win the award.

There are so many people that I have to thank that participated in creating the Northwest 50-01. First of all our, thanks go to Doug Hallat who, as the owner, provided the opportunity. They made so many wonderful selections of both interior and exterior design features as well as equipment, electronics, and furnishings. I next have to thank the build team at NWT, led by Gene Kohlmann, General Manager. Team members include Kevin Clinger, Chris Duppenthaler, Paolo Jurkovich, Dan Thompson, Curt Diemert, Steve Martin, Pat Munroe Sundi Camp and many others who contributed their talents. They all did a terrific job. Contracted team members include Steve Seaton, Topcat Engineering, Canvas Supply, JJ and his finishing crew, Stone and Clay (Bellingham), Creative Surfaces (Anacortes), and Kristen Engerman of Interior Arts (Blaine). Thank you all!!!! 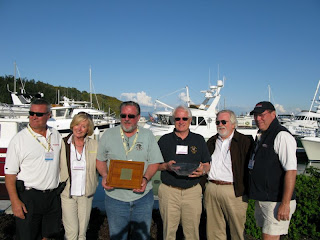 One of the most positively commented features of the boat was the fishing gear. 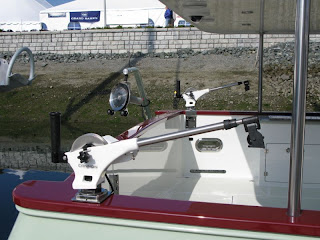 This shot shows the two downriggers and the pot puller. Downriggers are used for salmon fishing here in the Pacific Northwest. 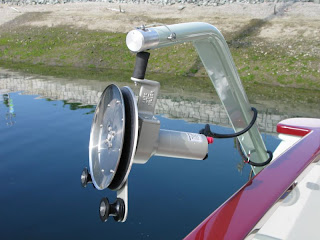 The pot puller makes it easy to bring crab and shrimp pots up from the depths (think Deadliest Catch in miniature). Anyone who has hauled up a crab pot or shrimp pot will appreciate the value of this option. The electronics and controls in the cockpit were also a hit. (see previous blog posts for pictures).

The enthusiasm of the people who visited us on the boat at Trawler Fest was very high. You might even think that the recession was ending after talking to many of them. We have quite a few people who are interested in our building them their dream trawler.

Until next time……thank you all who voted for the NW50 this weekend.