I am continually amazed at the imaginative innovations our owners come up with. I recently was back at the Annapolis Boat Show, aboard “The Path”, NW45, hull #2 and observed the boat deck/ flybridge seating arrangement that the owner designed, had fabricated and then installed. 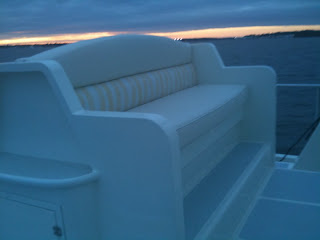 I apologize for the quality of the pictures. If you had been in Annapolis for the show, you would know that it rained sideways for the entire 4 day event. This was due to a nor’easter that lingered in the area. These pictures were taken at the conclusion of the show with my iPhone shorty after it stopped raining.

The owner had not originally opted for our optional boat deck seating area but once he got the boat back home to Annapolis, he realized how much he would use the upper deck while aboard and almost immediately began thinking about adding a structure there.

The basic structure is constructed in aluminum and is painted with an LPU paint to match the gelcoat of the superstructure. The workmanship is very good and the design extremely functional. Although hard to see, the seating allows for 2-3 people to sit at the upper helm station with good visibility over the pilothouse roof. 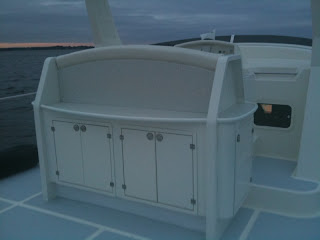 The numerous cabinet doors give great access to a large storage area under the structure. The owner kiddingly said that it would serve as another stateroom in a pinch. On the aft portion and on each side are handy shelf areas, the shelves of which being done in a matching Avonite solid surface countertop material. 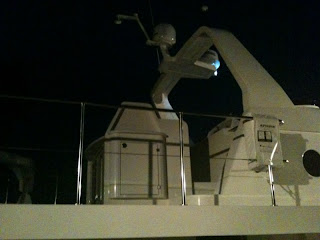 This shot, taken after dark, shows the profile. Many favorable comments were overheard by visitors aboard during the show. I think the owner may qualify for an honorary appointment to our design team. What do you think?