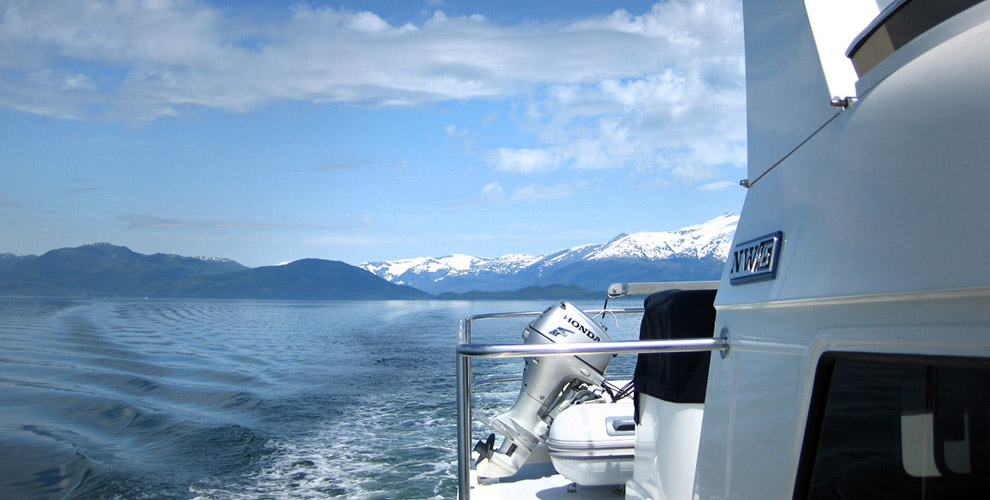 Northwest Yachts - the Past
In September, 2001, Jan and I went for an end-of-the-season cruise to Desolation Sound (British Columbia, Canada) aboard our 46′ sailboat, “Integrity”.  We were gone nearly 3 weeks and were headed home from Chatterbox Falls, a “must see” cruising destination up Jervis Inlet.

The weather was really gnarly.  It was “blowing like stink”, raining sideways, and downright cold.  Our sailboat had a completely enclosed cockpit, but we were still cold and generally miserable. I remember shivering and blowing into my damp, gloved hands, trying to keep them warm.  It was then I suddenly had this vision of myself, standing at the helm of a pilothouse trawler; in my bedroom slippers; with a warm mug of coffee in my hands.

That was it…..that’s when we first began to talk about moving over to “the dark side”.  It seemed heresy at first. I had been a sailor for most of my life and possessed the usual sailor’s disdain for “stink potters”.  In our minds, there was only one acceptable alternative to our sailboat…..and that was a trawler.

Little did we know then, this would be a life changing moment; the beginning of an adventure that has been one of the most personally rewarding things we’ve ever done.

Having been in the yacht brokerage and charter business for several years, we were looking at ways to expand our business.  So adding a new line of trawlers seemed like it would make sense.  While doing research for trawler manufacturers we came upon an advertisement on Yachtworld for a Chinese builder seeking US dealers. I sent them an email and, to make a long story short, within a couple of weeks we were on an airplane headed for Hong Kong and then a ferry ride to Shekou, China to visit the shipyard. This builder had a long history of building trawlers, having built over 550 in the previous 20 years.

After several somewhat confusing days, caused by language and cultural differences, we inked a dealer contract and ordered a 36′ trawler.  I remember when we came home and told friends what we had done, the said, “you’re going to do what?…….where?……with whom?……..are you nuts???  They didn’t dampen our enthusiasm, however.  We were excited and committed to going forward.

Within a few months, Jon Allsop joined our sales team. Jon had a lot of trawler design experience and as an engineer, had some innovative ideas, especially in the area of systems. Jon traveled with me to visit the yard and while there, we saw a hull mold with  possibilities for a good platform to build a new design. It was on a napkin at the Nan Hai hotel in Shekou that he and I conceived of, what turned out to be, the Integrity 496, a 52 foot overall raised pilothouse trawler.  With the help of John Anderson, a gifted yacht designer from the Seattle area, we turned that napkin sketch into workable plans.

Sadly, four years and seven boats into the project, the shipyard was sold. It was then we decided to build a new generation of trawlers here in the US. Beginning with a clean sheet of paper or….er….computer screen we started building the new boat models like you would build an aircraft. That is to say we completely engineered the entire boat before commencing the build process.

We formed a joint venture with a local (Anacortes) manufacturing firm to construct the boats. The first hull was launched in the fall of 2007.  In the spring of 2009, we displayed the first Northwest 50 at Trawler Fest in Anacortes. There were about 60 other boats on display, all vying for the coveted “People’s Choice” award.  When the final tally was taken, we were very excited to learn our Northwest 50 had come out on top!

Steve Seaton began working with us in 2008 to assist in making some improvements to our existing product line.  He liked what we’d done but had some ideas for changes to implement in future boats.  The economy, however, was still poor and we could see it would probably not improve in the near future.

Our joint venture partners had other non-marine projects they wanted to pursue which led us to “reinvent” ourselves.  Sales trends for new boats tended to be in the larger sizes. As a result we enlisted Steve Seaton to help us develop an all new series of trawlers and expand the mix to include larger expedition yachts.

We had cruised Nor’wester, our hull #1, many thousands of miles, had been listening to our customers and would-be customers and learned a lot about how to improve the product. And because we were beginning anew, we could incorporate many of these ideas into the re-invented product line. Since we are a design and production team, and can work with multiple shipyards to build our product, we don’t need to be constrained by traditional manufacturing models.

We have designed the boats using what I call the “3 R” approach. This is using the right hull form, built out of the right materials for the right application. For inside passage, coastal, and near coastal waters, semi-displacement, FRP hulls, reinforced with Kevlar make the most sense.  And for serious offshore cruising (ocean crossing), I  believe steel is, by far, the best choice for hull material.

Safety at sea is one of our prime considerations and if you are going to be truly self-sufficient and want the best margin of safety, then steel should be your choice of hull material. It was decided we would need to select shipyards to build the various models based on their ability to manufacture high quality product and deliver great value, no matter where they may be located. This has required us to look in Taiwan, Turkey, and China where we’ve found several shipyards ready to work with us and meet our criteria for quality and value.

From the very beginning, nothing has given us more satisfaction than working with a client to create a special boat just for them. We don’t feel our clients are just the next to “take a number”.  Each boat is like a nautical “work of art”.  We take great pride in the fact most of the boats we’ve delivered are still owned by the original owners. We love to hear about their cruises and the compliments they receive from people who they encounter or have welcomed aboard. We love the process and the people we work with.

Working with Steve Seaton continues to be a daily joy. He has a knack for helping us take an idea and turn into something special. Phil Friedman is a true professional, the best at what he does in new-build management.

Northwest Yachts - the Future
As long as there are people who want something special, something different from the norm; those who appreciate the best, we will continue……………..